skip to main | skip to sidebar

Promote Writing That Deals With Cancer

On Twitter, use the hashtag #WritersUnitingAgainstCancer and post about books, blogs, etc. that deal with cancer and/or raise money for the fight against cancer.

“Since the book's available in all ebook formats completely for free, I would ask everyone to have a look at this great short story. Trust me, it's worth your time.” –from Tista Ray’s review of Fat Diary.

“Well worth the read for the laughs!” –from SheWolfCat’s review of Fat Diary.

A Girl and Her Kindle: The Acorn Gathering

A Girl and Her Kindle: The Acorn Gathering: Writers United Against Cancer Book Trailer
Posted by Duane at 5:24 PM

Fat Diary. In this free comedy eBook, a West Texas librarian makes fun of herself and the other people in her town, while writing about her reasons for wanting to lose weight. Pamela Mae Willard must learn to love herself. Still, she can’t resist laughing about her problems, and about the adventures of the colorful characters in Acorn, Texas. This irreverent, politically incorrect tale reveals a woman finding joy in life, no matter what happens to her and no matter who mistreats her. This short story also appears in The Acorn Gathering. Some of its characters also appear in The Acorn Stories.
Posted by Duane at 4:57 PM

10 years ago, the publication of The Acorn Gathering: Writers Uniting Against Cancer offered readers the chance to buy a collection of short fiction, with all royalties going to the fight against cancer. Today, it is still available in paperback, and now in eBook format, with the same mission. With cancer constantly affecting our lives, I’m proud to have taken part in that project and hope you’ll take the time to read more about it .

The writers who joined me in donating their writings made it a memorable collection. I also want to acknowledge the memory of John Mudd, a blog innovator who both helped the project happen and helped it find an audience.

The Acorn Gathering eBook is now available through Barnes & Noble!
Posted by Duane at 10:30 AM

In this live performance on Stand Up To Cancer 2010 (09/10/2010), Green Day’s Billie Joe Armstrong performs their hit song “Wake Me Up When September Ends.”


The following paragraphs introduce “The First Few And the Last Few,” one of the stories I wrote for The Acorn Gathering: Writers Uniting Against Cancer.

The Last Few And the First Few

Dedicated to all people who risk their lives to protect others.

We entered the twenty-first century as we left the twentieth century: with uncertainty. But everything seemed safe for a while, safe and prosperous. Then the economy started to falter. And then September 11 happened.

I arrived in New York City two days after the attacks on the World Trade Center. When I’m not in active duty with the Army, I often work as a volunteer firefighter in El Paso, where my mother lives, or in Acorn. In case you haven’t heard of it, Acorn is a little town in West Texas, population 21,001. After my family left an even smaller town called “Ropesville,” I grew up in Acorn; my brother recently became the sheriff there, and I visited him for a while before coming on up here. It’s my first time up this far north in the states, though I’ve done quite a bit of traveling in my life.

I expected a call soon, one that would again cause me to travel. And, like the one I got just after I signed up with the Army, those travels would take me to a hostile, foreign land. In the meantime, I wanted to do what I could here. Everyone knows where I am and how to get hold of me, though I actually need to go back to the hotel and check my messages.

I haven’t slept since arriving at Ground Zero. Ground Zero—that’s what they’re calling the area of destruction. My mother, always biased, has been telling everyone that it was heroic of me to come here. The New York City firefighters, police officers, and rescue workers are the real heroes. I’m just helping out where I can. I’ve seen them help countless people already while sifting through the wreckage for survivors.

I’ve seen volunteers of every kind, and I’ve seen every good trait of humanity. New York hardly seems like the cruel, unfriendly place I’ve always heard about. We’re all doing what we can.

The team I was with finally convinced me to take a break. Instead of going back to the hotel, I walked a block away and collapsed in an alley, leaning against a building.

As I sit here, catching my breath, still wearing my helmet and my protective jacket, I reach into the pocket of my jeans to find an envelope, now all folded up and crinkled.
Posted by Duane at 10:31 AM

Visit Goodreads to discuss The Acorn Gathering's stories, themes, and authors, or the fight against cancer.
Posted by Duane at 12:09 PM

Fight Cancer, the video for The Acorn Gathering, has received over a thousand viewings at YouTube.

About The Acorn Gathering:

Join the fight against cancer by purchasing this fund-raiser by authors Jan Chandler, Shawna Chandler, Huda Orfali, Duane Simolke, Timothy Morris Taylor, and Bill Wetzel. All author and editor royalties go to funding cancer research! These stories range from gritty and controversial to gentle and touching. This anthology takes readers across several landscapes, during times of trouble, change, hope, and triumph. 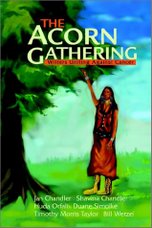 AUTHORS WHO GATHERED TO WRITE FOR A CURE!

Jan Chandler lives in Austin with her husband and two children. She writes Juvenile, Science Fiction, Fantasy, Erotica and Poetry. She is currently juggling six unfinished novels, a new career, and an obsession with video games.

Shawna Chandler (now Shawna R. Van Arum) is a writer whose mind wanders between the confines of time and space even as her body is chained to a desk in Lubbock, Texas. A full-time mother and part-time literary adventurer, Shawna has contributed to All Write Stuff, Zoetrope, The Peralta Press, 3AM Magazine, The Journal of the Blue Planet, Coil Magazine, The Lubbock Magazine, and other print or online publications. Visit Shawna and her work at: http://srchandlertx.tripod.com.

Huda Orfali’s collections of poetry and short stories explore the complexities of human society. She published her books Blue Fire in 1999, Flower in The Cold
in 2000 and Fisher Prince in 2006. Having grown up in the Middle East, an area torn apart by war and violence, Orfali focuses her intense poetic scrutiny on the terrors of war and the struggle for peace. The creative impulse for the poems is equally idealistic and humanitarian for the large part. Her poems are predominantly concerned with social and political issues that contribute to universal well being and to the common good. Orfali is a graduate of Peace Studies and Conflict Transformation. She received her MA from Bradford University, UK and was also a Fulbright scholar at Eastern Mennonite University, Harrisonburg, VA.

Timothy Morris Taylor is an elementary special education resource teacher in Texas. He is a life-long, devoted fan of movies, music, and the arts. A period of time as a classic film projectionist at a historic movie theater in Texas was one of the great highlights of his life. Because of the personal loss of a loved one to cancer, Timothy is a strong advocate of the race to find a cure. He lives in Houston with his two cats.

Bill Wetzel is an enrolled Blackfeet Indian and a native of Cut Bank, Montana. He received his A.A.A. in Video Production from the Art Institute of Seattle (Fall 2001) and is, currently, a Creative Writing major at the University of Arizona. He is a published poet and has worked on various video and film projects. Wetzel was the 2001 AIS Student Show winner in Video Production for his efforts as Assistant Director and Co-Screenwriter on the short digital film Claustromania. He is currently researching his first novel, as well as working on several short stories and a screenplay idea. He has written for the Arizona Daily Wildcat and Red Ink Magazine. His essay about Blackfeet Indian author James Welch will be in the Studies In American Indian Literature series.

Special thanks to John Mudd for The Acorn Gathering’s publicity campaign!

What is an Acorn Gathering?